EUMOS 40509 is now available in ITALIAN, SPANISH, PORTUGUESE and ROMANIAN 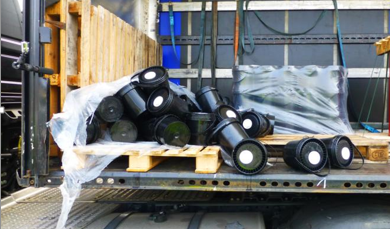 The whole article as PDF in
English | German | Italian  | Russian

EUMOS, the European Safe Logistics Association, is calling for more transparent and practical methods when it comes to load-securing standards. EUMOS is critical of the lack of comprehensive certification in load-securing activities (e.g. inspection of outer packaging, driving dynamics investigations).
The processes and methods – which are also the basis for certificates – do not undergo third-party monitoring. Experts and testers, therefore, should ideally obtain personal certification to DIN EN ISO/IEC 17024, and EUMOS is also in favour of this.
Driving dynamics tests in accordance with EN 12642 Annex B are an established method of checking load-securing measures. However, load-securing starts with the packaging and the load-unit. And this is the starting point that EUMOS takes in a standard that has been referenced by the European Commission, approved by the European Council and recommended for adoption. EUMOS still regards road tests as necessary and suggests they be combined with the dynamic laboratory tests. Thus the laboratory tests contribute to the reproducibility of test results and supplement the driving dynamics tests on a case-by-case basis.
Road tests are always done on an individual basis, since vehicle, load, driver, road and even temperature differences can never be exactly simulated.
“We are working on a European set of guidelines, which will enable industry users and transporters to fulfil their responsibilities,” says President of EUMOS Wolfgang Neumann. “To this end, we have developed our own test methods, in particular in relation to the stability of load units.” Neumann reckons that more than one in two load units – for instance, pallets – are not stable enough for transportation. “Our standards supplement the existing test standards and fill in some of the gaps,” says Neumann. “So there is a lot of work to be done!”
The EUMOS standard for load-unit testing, unlike its counterparts, states specific parameters for assessment and simulation, such as pressure build-up times, durations and load cycles. This facilitates transparent and adequate reproducibility of results. The University of Leuven, Belgium, identified pressure build-up times, load cycles and acceleration force durations as test criteria in the course of its research lasting several years. Its research has given rise to a simple and easy-to-measure tolerance range for the maximum shifting of palleted products. The specimens must be subjected to the accelerations described in the standard for at least three test runs.
This means that, for the first time, EUMOS has given a set of criteria for the assessment of load-unit stability based on pure physics. The laboratory test can be carried out regardless of the packaging materials, be they drums, cardboard boxes or palleted sacks. This makes it possible to demonstrate the performance of load-unit securing devices like straps or wraps, with reproducible results. Once the stability of the load-unit has been established, it is often possible to fall back on existing driving dynamics investigations or on the stability of Code XL trailers. This saves time and money, and enhances safety across Europe.
In 2013, the EU Commission incorporated two of the standards developed by EUMOS in EU Directive 2014/47. All member states had been consulted over the course of several years on both standards, and they were approved by the European Council.
Tests and certificates for load-securing are not prescribed by law. Many manufacturers in the industry voluntarily invest in tested and certified packaging methods and securing measures to eliminate damage in transit and liability risks. In the event of accidents or checks by the police, certificates make it easier to prove adequate load-securing: the inspecting officer or qualified expert can check a test mark on the load units; for example, by means of a QR code.
There are test facilities for stable load units in France, Belgium, Poland, Italy and Germany, for example. Others have been set up based on the EUMOS standards in Asia, Russia, and more than five are now operating in the USA. It seems likely that other test facilities will be built in Austria and other European countries as well. The EUMOS 40509 standard has already been in use in the above countries since 2012, where it has met with a high level of acceptance and has boosted safety on a lasting basis.
EUMOS The association was established in Brussels in 2013 to succeed EUROLAST (European transportation of loads). It promotes the advancement of the state-of-the-art of safe logistics in Europe. EUMOS deals primarily with matters relating to load-securing, packaging, load-unit formation, vehicle technology and process optimisation as well as combinations of these. In November 2015, EUMOS brought together industry experts from 21 nations, including Malaysia and the USA, at its conference organised in conjunction with the Austrian Economic Chamber.
The expert members of EUMOS, without exception, work for the association on a voluntary basis. Only in the Brussels office is there one full-time employee working in administration and organisation.
Save the Date:        5th international EUMOS conference on Durable Logitstics: September 1415, 2017 in Vienna 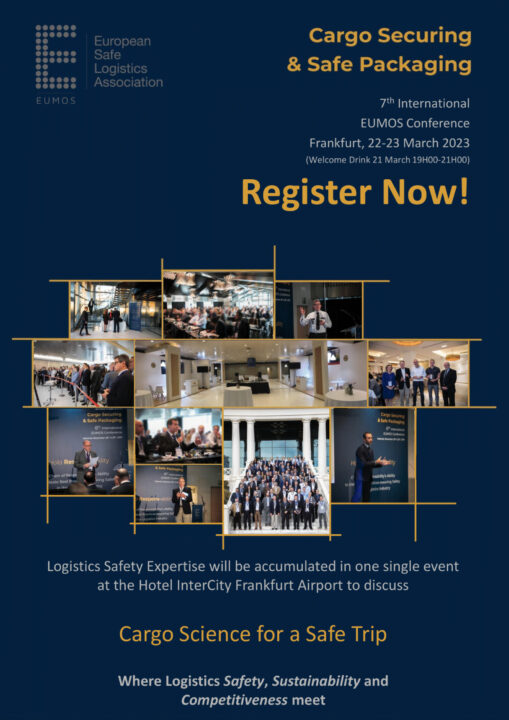